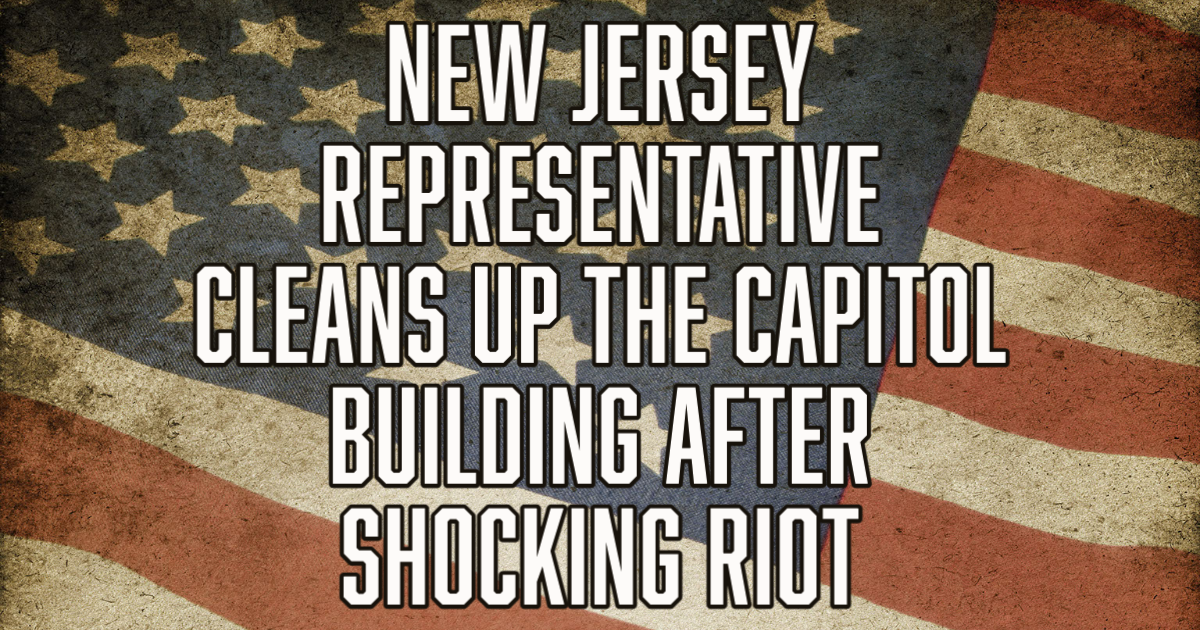 The storming of the United States Capitol was a shocking event for Americans in general but a personal experience for politicians in Washington D.C. at that time. Members of the House and the Senate were forced to take shelter and wait until it was safe for them to leave the breached Capitol buildings. Although none of the Congresspeople were physically injured, the remnants of the day’s events remained clear in terms of the damage done to the Capitol buildings and the surrounding areas. These buildings are quite old, made largely of materials like marble and crafted to be symbolically representative of American values more than they are durable. The Capitol Building stands as the meeting place of the U.S. Congress and the seat of the federal government legislative branch, which doesn’t necessarily require physical durability. For this reason, the buildings were at risk of experiencing damage during the storming. While they largely escaped long term damage, there remained litter and debris like broken furniture surrounding the buildings. These were noticed by NJ Congressman Andy Kim as he prepared to go home after voting to certify Joe Biden at the next U.S. president.

The New Jersey representative, a two-term Democrat, noticed that Capitol officers had been assigned to cleaning up the scattered office equipment and garbage, and he was compelled to help them. Picking up a trash bag, NJ Congressman Andy Kim didn’t bother to change his clothes or move on elsewhere to put away his belongings. He simply began to join in, despite the fact that it was quite late in the night, or early in the morning, rather.

His good deeds were noticed by New Jersey Representative Tom Malinowski, who recognized what Kim was doing at one A.M. By that point, NJ Congressman Andy Kim was actually working largely alone, picking up debris and garbage with the intent to eventually move it into a trash dumpster later. Much of the garbage that he was picking up had been left behind by the mob that stormed the Capitol building. This may seem like a remarkable gesture to make following the day’s events, and in many ways, it certainly is. But Kim’s past speaks to his lifetime of service.

In many ways, NJ Congressman Andy Kim hailed from a background that aligns with his recent act of service. His parents were Korean immigrants, making Kim a first-generation American. Immigrants in the United States can naturally face certain difficulties that may not necessarily be similar to those experienced by individuals who are not immigrants. For example, there are fewer children of immigrants in the U.S. Congress than there are representatives that do not hail from recent immigrant families.

In fact, NJ Congressman Andy Kim is actually the first Asian American to represent New Jersey in Congress. Prior to that, Kim made a name for himself academically at the University of Chicago. Receiving his degree from the university, he was also a Rhodes Scholar. Kim was actually specifically chosen by Obama to serve as the Iraq director for the National Security Council. This was done in part because Kim had a background of fulfilling similar roles. Kim’s record spoke to his ability to fulfill a similar position. This speaks to the fact that though Kim was a qualified politician with an extensive background in political work, he did not feel above working to pick garbage and debris up off of the floors of the Capitol building.

NJ Congressman Andy Kim saw the process of picking up trash and debris off of the floor of the Capitol building, despite the trauma that had occurred in the building and the surrounding outdoor structures, as a healing moment. It was symbolic and spoke to the love that he bore for the Capitol. Heartbroken and disturbed by the desecration of the iconic building, he did the work in order to ensure that it was as well-cleaned as possible. Not only was this for the sake of the Capitol building. It also eased the stress and work placed upon the employees working within the Capitol, many of whom had experienced stress and trauma throughout the day. In this sense, it was a major act of service.

The Damage Done to the Capitol Building

Fortunately, at this time the initial inventory does not indicate that there was major permanent damage done to the building and the art and decor within it. It is clear that there will be a need for door repairs in the near future, as doors were obviously the most immediately attacked by the mob. Doors were directly damaged, while their hinges and glass features were also damaged. In some cases, doors were also shot at or through, leading to a need to not only handle the repairs themselves but also replace some.

Additionally, a good deal of glass was scattered around the building due to smashed windows. These windows were broken in the riots in general, and they allowed access for the mob. Fortunately, these types of fixtures are not overly unique and can be replaced or repaired fairly simply. The same cannot be said for many of the fixtures and features within the Capitol building, which are normally housed much as they would be in a museum. It should be noted that some of these fixtures and features are on display because the Capitol building has historically been open four tours given to the public. Due to some reports indicating that the insurrectionists did tour the Capitol building prior to the storming, there has been some discussion of limiting or even eliminating tours in the future.

Although there was graffiti throughout the Capitol building, this graffiti was not applied to the historical statues, murals, and benches. This does not mean that there was not intent to damage these pieces, however. Tear gas, fire extinguisher liquid, and pepper spray residue were seen on those types of features, indicating that there was an effort made to damage them in major ways. Many of these items are quite old and usually have been restored several times over the years. They will need to be carefully cleaned and conserved following the riots, which will naturally expend funds.

At the building’s exterior, more damage was done, perhaps because more people remained outside the building than were able to actually breach the building’s interior. Frederick Law Olmsted designed two bronze light fixtures in the nineteenth century, which were hosted outside the Capitol building. These were broken in the midst of the riots. Additionally, the inventory revealed graffiti applied to the west side of the building. Specifically, this graffiti was applied in areas close to the stands being constructed for Joe Biden’s inauguration. Although there was understandable and valid concern regarding the direct violence presented by the mob, many of whom were wielding firearms.

The fact is that many of the people within the mob were aware of the damage that they could cause without actually physically harming other people. Some of them may have preferred to cause property damage due to the perceived lower penalties compared to those associated with causing a personal injury. In reality, there are still many legal penalties associated with causing property damage as well, and some of them can be quite severe. This is in part because of not only the cultural threat posed by this damage but the financial repercussions they offer.

At this time, the inventory reports that no major artworks were damaged in the midst of the event. The Capitol building does house some significant artworks. The art collection managed by the office of the Architect of the Capitol lists some of the prized artworks online, although they are not always constantly displayed. These include busts and statues of prominent historical and political figures like Abraham Lincoln and Alexander Hamilton, as well as reliefs depicting lawmakers, and even relief portraits of foreign rulers like Alfonso X. For people like NJ congressman Andy Kim, the point is not the potential value of the items that were damaged, but the symbolic significance.

The reality is that the Capitol building being breached is historically significant, as these types of events are unusual in the United States. Additionally, as many foreign leaders noted in their reactions, the Capitol building is symbolically linked on a global scale with democracy. So whether or not there are real results found through the actions of the mob, the aesthetic and symbolic significance of the breaching cannot be ignored. This is why many have called for the penalties for people within the mob at Capitol Hill to be severe, in part to dissuade future people from doing the same and causing this costly, painful damage.

As of now, arrests are ongoing following the riots. The number of people that may or may not go to trial remains to be seen. Part of the reason why these arrests are taking some time is that they did not initially occur at the time of the event. Rather, the people within the mob moved on out of state, which made it difficult though far from impossible for law enforcement to track them down and ensure that they faced justice. In some cases, they have been charged with crimes related to property damage. However, there is the potential for more charges to occur over time.

The other charges in question would potentially include gun-related offenses. These charges can potentially be quite serious, prompting the rioters to seek aid from criminal defense attorneys. Not all of the rioters carried legal gun permits, or permits to carry the guns in public or carry them concealed. There are also federal laws against carrying a fun in the Capitol building, as well as the possession of an unregistered firearm or unlicensed ammunition in the District of Columbia.

In one case thus far, an individual has been charged with assaulting a federal law enforcement officer. This is in fact a federal crime, and therefore carries a hefty penalty. Individuals can also be charged with unlawful entry on Capitol grounds, as they did breach the Capitol building unlawfully. Another federal crime, this crime may be more severe in terms of consequences that some Americans may realize.

This is a good deal of debate concerning the law enforcement officer that was killed during the event. Much confusion surrounds whether or not the person who killed him will be charged with murder or manslaughter. Additionally, it can be difficult for investigators to uncover which individuals were directly involved in the death.

This can all be extremely discouraging to read about, and understandably so. Regardless of an individual’s political affiliations, it can be difficult for them to view the storming of the Capitol building as anything other than a major historic event and a signal of a continuously tumultuous political climate.

But there is hope to be found. This hope can be found in the simple but profound actions of NJ Congressman Andy Kim. Although he may not be able to find the perpetrators of the property damage immediately, he shows that individuals can make a difference and do real good despite the damage that has been done and the frightening conditions under which he suffered trauma so recently. Many people may be encouraged by his actions, understanding that if the Congressman, who was at the scene of the event, can make a small and positive change, so too can other Americans.